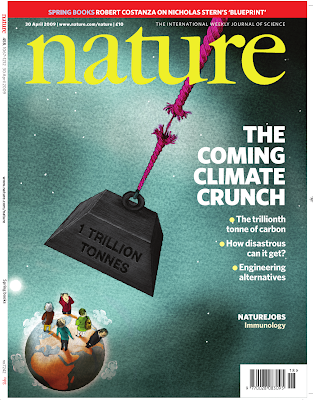 (To avoid 'interpreting' I am simply reposting the Potsdam Institute's own press release on the subject. In fact there is an excellent 16 page Q&A commentary on what the study says and what this means here. But in a nutshell it says we need to forget 2050 and focus on 2020).

April 30, 2009 - Less than a quarter of the proven fossil fuel reserves can be burnt and emitted between now and 2050, if global warming is to be limited to two degrees Celsius (2°C), says a new study published in the journal Nature today (1).

The study has, for the first time, calculated how much greenhouse gas emissions we can pump into the atmosphere between now and 2050, to have a reasonable chance of keeping warming lower than 2°C (above pre-industrial levels) – a goal supported by more than 100 countries (2). We can only emit 1000 billion tonnes of carbon dioxide (CO2) between the years 2000 and 2050. The world has already emitted one third of that in just nine years.

“If we continue burning fossil fuels as we do, we will have exhausted the carbon budget in merely 20 years, and global warming will go well beyond two degrees,” says Malte Meinshausen, lead author of the study and climate researcher at the Potsdam Institute for Climate Impact Research. The three-year research project involved scientists from Germany, the United Kingdom and Switzerland (3).

The study concluded that greenhouse gas emissions must be cut by more than 50 percent by 2050 relative to 1990 levels, if the risk of exceeding 2°C is to be limited to 25 percent.

“Only a fast switch away from fossil fuels will give us a reasonable chance to avoid considerable warming. We shouldn’t forget that a 2°C global mean warming would take us far beyond the natural temperature variations that life on Earth has experienced since we humans have been around,” says Malte Meinshausen.

The study also compared the volume of CO2 emissions that could result from the burning of known economically recoverable fossil fuel reserves—oil, gas and coal—and found that these reserves are four times larger than the emission budget between now and 2050 (4). “To keep warming below 2°C, we cannot burn and emit the CO2 from more than a quarter of the economically recoverable fossil fuels up to 2050, and in the end only a small fraction of all known fossil fuel reserves,” concludes Bill Hare, co-author of the study.

The study used a single, efficient computer model which incorporated the effects of all greenhouse gases, aerosols and air pollutants, and the range of possible responses of the carbon cycle and earth’s climate system. This was combined with about a thousand emission pathways.

The study explicitly takes into account the uncertainties related to modelling climate change. Throughout the study, probability statements were used to summarize the current level of knowledge based on observational data. It also used a huge number of different simulation results from the latest assessment report of the Intergovernmental Panel on Climate Change (5). In taking this comprehensive approach the researchers went a step further than previous work.

The new results have direct relevance to the international negotiations now underway.

“Our study draws on a huge body of research reported in the numerous assessments of the Intergovernmental Panel on Climate Change. It clearly shows that the 2°C target which many countries have adopted will require quick action in order to follow the blue route rather than the red one in the figure,” says Sarah Raper, co-author from Manchester Metropolitan University, UK.

“With every year of delay, we consume a larger part of our emissions budget, losing room to manoeuvre and increasing the probabilities of dangerous consequences, “ adds Reto Knutti, co-author from the ETH Zurich.

A companion study (6), also published in Nature today by Myles Allen and colleagues, show the necessity to limit the total amount of carbon that humankind ever emits.

“In principle, it is the sum of all CO2 emissions that matters. In practice, substantial reductions in global emissions have to begin soon, before 2020. If we wait any longer, the required phase-out of carbon emissions will involve tremendous economic costs and technological challenges - miles beyond what can be considered politically feasible today. The longer we wait, the more likely our path will lead us into dangerous territory,” concludes Malte Meinshausen.

The authors of both papers have collaborated on a Commentary article (7) focussing on their long-term policy implications, published today in Nature Reports Climate Change. See as well the News & Views piece in Nature today (8). 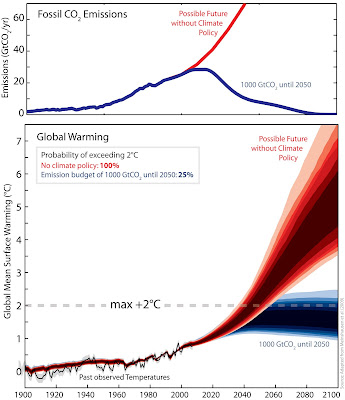 Two possible futures: One in which no climate policies are implemented (red), and one with strong action to mitigate emissions (blue). Shown are fossil CO2 emissions (top panel) and corresponding global warming (bottom panel). The shown mitigation pathway limits fossil and land-use related CO2 emissions to 1000 billion tonnes CO2 over the first half of the 21st century with near-zero net emissions thereafter. Greenhouse gas emissions of this pathway in year 2050 are ~70% below 1990 levels. Without climate policies, global warming will cross 2°C by the middle of the century. Strong mitigation actions according to the blue route would limit the risk of exceeding 2°C to 25%. For more details, see Figure 2 in Meinshausen et al. (2009). Credit: M. Meinshausen et al. (2009)

(2) Note to Editors: For dangerous climate change to be avoided, 109 of the 192 signing countries of the United Nations Framework Convention on Climate Change are calling for warming to be limited to two degrees Celsius or lower relative to pre-industrial levels. Some of the most vulnerable countries as Small Island States and the least developed countries even consider 1.5 degrees Celsius as the maximally acceptable warming level.

(3) The study was led by the two brothers Malte and Nicolai Meinshausen from the Potsdam Institute for Climate Impact Research and Oxford University’s Statistics Department, respectively.

(4) More than 300 billion tonnes of carbon dioxide have been emitted since year 2000 due to burning of fossil fuels and deforestation. Thus, the emission budget of 1,000 billion tonnes (GtCO2) for the years 2000 up to 2050 is reduced to less than 700 billion tonnes for the remaining period since 2009. This remaining budget is hence less than a quarter of our estimate for known economically recoverable fossil fuel reserves (2800 GtCO2). See Meinshausen et al. (2009) for further details.

I'm going to sharing this big timee..even worth going without sleep for.