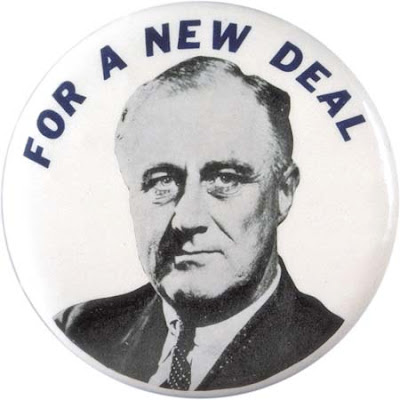 As reported by Sky, our PM here in the UK: "wants to create jobs in school repairs, new rail links and hospital projects.
He also hopes to usher in a new digital age by creating a super-fast broadband network for Britain, as well as creating several green jobs." Hopefully that several is a typo (several million, perhaps?), what they go on to say is that "This would include investing in electric cars and wind and wave power - which the Prime Minister claims would out-do the Obama plan, creating more jobs for Britain in relative terms." Meanwhile in the US of A the Obama New Deal plans look suitably immense and the centre piece could be a smart electric grid. Smart grids could be a key way to do more with less energy; according to Alex at World Changing 56.2% of energy produced in the electric grid is wasted in generation or transmission.

But the Real New Deal could come not from government infrastructure investment (I's tend to judge their commitment to this by their record - in the UK we have the third lowest mix of renewables in Europe, ahead of only Malta and Luxembourg) but from VC funding and a resulting surge in innovation. While some are saying VC is going to disappear from internet ventures (it's easier just to build it and see) and the world's rich investors have taken their worst hammering since the sack of Rome, the clean tech investment sector is the only one predicted to grow this year. This could benefit from a double whammy of a huge pool of talent from other sectors with time on its hands - similar to the fallout from the dotcom crash in 2002 which drove the web 2.0 innovations; coders doing stuff 'right' in some cases just to keep their skills fresh. Details of the 400 person National Venture Capital Association survey which came to this conclusion at triplepundit.

Of course it's about much more than cleantech. But it's a start.
Posted by John Grant at 04:04