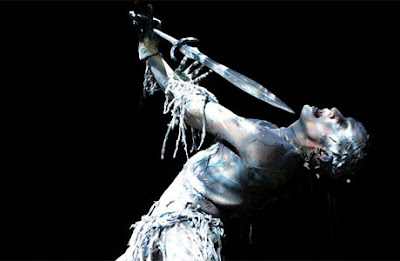 Great stuff on awkward truths & do keep it coming - I've seriously got to follow up that lamb stat it annoys me not knowing why that might be true. But its set me thinking about the whole framing of green issues; addicted to oil, the dying planet etc. Is the emotiveness helpful. Do we have to cast ourselves as gollum to fling the ring into the pit of despair...?

There's something of the psychological complex in all of this; there's barely any topic under the green sun which doesnt create quite deep conflict, for instance guilt. I probably mean "complex" in a loose sense - revisiting the list of Jungian complexes here there isnt an exact one that fits the bill. Although there are some great exotic contenders. But I think of complexes as psychological states relating to subjects and situations where our thinking gets clouded and distorted by excessive feelings and that's the general (non pathological sense) which I mean.

I am starting to think that the potential for the lessening concept is partly about icy rationality. Cutting through confused feelings with simple facts. If you've ever seen the Alan Carr stop smoking videos you'll know what I mean (although there's also a lot of hypnotic suggestion in there too).

If you take the analogy of weight loss. 90% of green stuff is targeting the emotionally fraught territories analogous to insecurity about your figure, eating disorders, size zero models etc. What we need is straightforward calory counting.

A friend of mine's brother is a professor in diabetic research & the biochemistry of obesity. He told me that the obesity trend is very simple. We eat on average 100 too many calories a day. Over decades that turns us into people with all the related health problems of heart disease, diabetes and so on. But its not a binge and fast issue. it's more like a dripping tap.

That's where lessening thing comes in. We need to reduce energy use by very roughly 5% a year. There is endless waste to be tackled within that, things we'd hardly miss, even be better without.

The"ohmygodwereallgoingtodieandevenworseitsallourfaultsowehavetoswitchovernighttomedievalsharecroftingactuallythatssomuchbotheritstemptingjustnottobother..." syndrome makes great ads, documentaries, speeches etc. But maybe this should be thoughtfully positioned into a more rational 'does what it says on the tin' space?

I've got a thoughts to develop (for a presentation) on the conflicted (or confused or complex-ridden) consumer; why whether green consumerism is a really well established trend is so hard to tell - with such divergent findings on whether behaviour is really shifting or not - because the people we are asking these survey questions cant quite make their own minds up about things. Because they are conflicted and confused - so that a very slightly different question can trigger a very different response.

I've no evidence other than the fact that surveys disagree, it's just a hunch. Would be interesting to hear from anyone who's doing groups on green at the moment (my last ones directly about this sort of issue were about a year and a half ago and things have probably changed - or maybe they havent - since then).
Posted by John Grant at 11:14

Doom and gloom connotes inevitability and that promotes apathy and hopelessness. Better surely to message along lines of each journey starting with a single step and focussing on how simple it is to take those individual steps.

(Did you get my email the other day?)

Really funny. I wonder about whether peopel can be so ration as to calorie count. This presumes it's a reasonable thing, to take more than you need. I see a kind of hording reptilian instinct at play... I may be wrong.

I have to be green, I must be thinking about the environment, I should be buying organic and fair trade, I have to reduce my carbon emissions, I have to save water, I should send money to help with Darfur, I must do my bit to be changing the world…. but…..I have to go to work, feed the kids, find a wife/husband, get laid, be entertained, see my friends, make more money, buy a better house, get a pension, follow my dreams, stop my addictions, be more happy with myself.

The current conflicts and complexities are daunting for the most energised and positive individual and most of us struggle to be that on a constant daily basis.

The evolution of the issues identifiers, turning into pressure group communication, leading to fringe awareness, creating green 1.0, followed by a disappearing trend, appearing again through real solutions, resulting in climate-change ‘the poster boy for the sustainable movement’ ends with our multi-issue, complex green 2.0 world today; the starting point for a global movement creating a systemic economic change and assimilating a new understanding of ourselves as a species.

It’s a lot to take in, and people not connected to the historical development have only just found out.

They have started but; turning off my lights and TV’s, changing my light bulbs, adjusting my thermostat, changing to green energy, taking delivery of my organic box, filling my cupboards with fair trade goods, reducing my car travel, going on holiday to Cornwall by train and so on is only made possible by my internal intellectual change fed initially by external emotional drivers.

Most of the mainstream are still in the ‘reaction to the news’ phase. To take the emotional messaging, (which does indeed make good ads and films) and turn it into an intellectual understanding, leading to real action and desire to act as individuals as part of an understood collective reasoning is a hard process.

That’s why some take one part and focus on it, some are frozen and unable to act, some become evangelical, and others refuse to believe.

We are actually, at a mainstream level, in the phase of a need for collective understanding on a reality basis.

This takes time, like any massive piece of news; I’m pregnant, my dad’s died, I’ve got my dream job, etc.

Is bound to create confliction and complexity.

The next stage for us is the big challenge. As communicators and strategists, (not to mention armchair social-psychologists and philosophers), we must help with this ‘shock’, take away the confliction, establish a simple path to be walked along, develop a single vision for the future with the umbrella arms of each connected issue, non-threatening and easy to understand.

It is no mean feat, but fear and confusion need to be replaced by optimism, hope and a passion to see where our futures are going, why we should be working towards it and.....enjoying the amazing journey it will take to get there.