Another day, another talk

This one is with a bunch of creative sustainability friends and friends of friends and is all about redesigning life. Do drop me an email (or leave your contacts in the comments) if you are in London thursday and want to pop along. 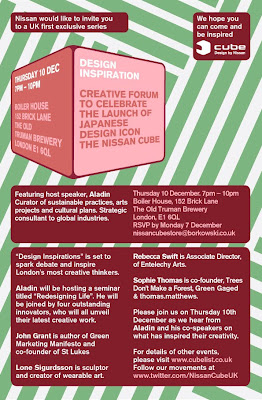 ps have stuck the detailed press release text into the comments.
Posted by John Grant at 07:11

Press Release – 4th December 2009
An evening with aladin :
introducing 4 leading cultural figures
in a magical showcase of chat, film, dance, fashion and music.
This Thursday 10th December, marks the highlight of the ‘Design Inspirations Series’ – a short season of exclusive forums hosted by some of the UK’s most celebrated creative talents.
Taking place at the Nissan Cube Store, East London’s latest conceptual, pop-up event space, ‘Design Inspirations’ final night will be entitled "Redesigning Life", and will be chaired by aladin. Former head of the Cultural Strategy Group for London, aladin is an iconoclastic magician who uniquely integrates strategy, culture and magic, counselling global industries and curating sustainable practices, arts projects and cultural plans.
aladin has brought inspiration to millions, but what is it that inspires him? He will introduce on the night four individuals who he believes are inspirational. In conversation with him, these internationally acclaimed cultural innovators, each influential beyond categories, will reflect on their own creative inspirations, approaches and exclusively unveil their latest work:
John Grant: Co-founder of St Luke’s and Abundancy Partners; author of the award-winning bestseller ‘Green Marketing Manifesto’; and marcomms advisor to boardrooms of major brands such as IKEA, Lego and DEFRA. Grant will give an exclusive preview of his new, highly-anticipated book, ‘Co-opportunity’ which he will reveal for the first time at the event.
Lone Sigurdsson: Renowned fashion sculptor and creator of ethical, wearable art; Sigurdsson works with major names such as Hussein Chalayan, Marcus Tomlinson, and Nick Knight, and recently teamed up with sustainable fashion brand, Amoosi. As part of her presentation, Sigurdsson will exclusively screen a short film co-directed with Marcus Tomlinson, and introduce a showing of her first piece for Amoosi, modeled by acclaimed dancer Esther Huss who will perform to music from prizewinning musician and saxophonist, Chukuma Modu.
Rebecca Swift: briefly a catwalk model and actress but since many years an interdisciplinary artist and Associate Director of the integrated charitable arts company, Entelechy Arts, Swift has been creative director of groundbreaking interventions in London’s social/cultural heartlands since 1990. She created and directs the longstanding 'Ambient Jam' in Deptford and her own artistic work has been showcased at the ICA, Whitechapel Art Gallery, the Roundhouse, under the arches of a railway bridge and the legendary Pullit counterculture warehouse in London. Her film 'Cross currents' packed the 'Igloo' at the Royal Festival Hall in December 2008, and on the night she will reveal a clip from it for the first time since its premiere.
Sophie Thomas: Founding director of thomas.matthews, the UK pioneers in sustainable communication design, Thomas is one of the world’s top sustainability design gurus. Having led a vast array of award winning projects across the world ranging from the highly acclaimed ‘No Shop’ campaign for Friends of the Earth in 1997, the £15 million Space galleries for the Royal Observatory Greenwich and Greengaged for the London Design Festival, she is on the board of trustees for the Design Council, was included in the 2008 Who’s Who Business Elite list and will be in the Who’s Who 2010 edition.

The Nissan Cube, set to launch in the UK in January 2010 and exclusively previewed at the Cube Store, appeals specifically to a creative, underground, urban audience who appreciate its design credentials. The car has a cult following in Japan and provokes design debate wherever it goes. The unconventional launch approach taken in the UK, featuring London’s most creative cultural tastemakers, aims to establish the Cube first and foremost amongst a select, underground group of influencers and creative communities, using social media and word of mouth. After being seen at exclusive influencer events and venues, particularly in London’s East End, the Nissan Cube is already fuelling a design debate online, splitting audiences into those that either love it or hate it.

The Cube Store is at The Boiler House, Old Truman Brewery, 152 Brick Lane, London E1.
For more information on The Nissan Cube visit www.thecubelist.co.uk.
Twitter users can follow 'NissanCubeUK' and Facebook members can join 'Nissan Cube UK. Seen it? Love it? Hate it?' to keep the argument alive

Notes to Editors:
About aladin - curator and strategy consultant:
aladin’s practice encompasses three broad territories: interdisciplinary cultural creation; civic engagement; strategic planning and organisational development.
Since the early 1990s aladin's innovative practice as an artist/curator across art forms has featured at platforms including: Institute of Contemporary Arts, Hayward Gallery, Queen Elizabeth Hall, Whitechapel Gallery, Victoria and Albert Museum, British Museum, Natural History Museum, South London Gallery, Jerwood Space, the National Review of Live Art, the British Festival of Visual Theatre and the London International Festival of Theatre.
aladin has facilitated strategic vision development for some of the UK’s most influential creatives at events including: Greengaged/London Design Festival/Design Council; Department of Culture, Media and Sport/Tate Gallery; 2gether Festival. Between 2000-4 he led the development of the world's first integrated culture plan for the culture, media, sport, arts, heritage and tourism of a capital city when he was appointed by the Mayor of London to head the Cultural Strategy Group at City Hall.
aladin works as an interdisciplinary strategic management expert across the public, private and voluntary sectors has received citations, including a Financial Times/Arts+Business award for innovation. An experienced speaker and academic, aladin delivered a keynote address on leadership at the November 2009 World Petroleum Council meeting in Paris. aladin advises clients ranging from global industries to locally based community groups on engagement and consultation processes in relation to the social, economic, cultural and political space.

aladin is also a magician - he appears in the film 'Magicians' (starring Mitchell and Webb from 'Peep Show') and 'Book of Cool' (featuring 30 of the world's most skilled entertainers).