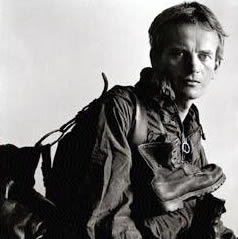 Imagine a mysterious species born in the Bermuda Triangle. (That’s the modern story anyway. Aristotle believed they grew “from the guts of wet soil”). The creature then travels over 6000 miles to live under a bridge in your local river. At some point over the next 50 years, triggered by some occult factor - and by a route unknown - they then return across the Atlantic to the Sargasso Sea to breed. And the cycle starts again. That’s the European Eel. Weird huh?

Imagine another species, which last year made over 900 million short stay and return journeys, averaging many hundreds of miles. Most, but not all, of these journeys happen in summer. There isn’t a clear destination, or direction of migration. This travel is associated with hardships ranging from sunburn, overcrowding, rip-off pricing and food poisoning to lost luggage and even violent crime. And why? What is it all for? Nobody knows. It isn’t exclusively the mating period. The availability of food is no greater. If you ask people they will say ‘you just need a change of scene’. Or perhaps ‘to get back in touch with nature’; ‘the sun on your skin’, ‘the wind in your hair’. But honestly you could do all that in your back garden. Isn’t the ‘summer holiday’ an utter mystery? In some ways, it’s even weirder than the lifecycle of the eel?

In UK government research about adopting sustainable lifestyles, the two things people were most reluctant to give up were foreign holidays and their cars. People speak of these in terms of freedom, feeling alive, in control of their lives. And we are not just talking about diehard 4-wheel drivers here. Many of the greenest people you know tend to be obsessive travellers too, trekking in Nepal, or windsurfing down under. They may have a Rocky Mountain bike, not a Porsche Cayenne; but isn’t the feeling of these two products rather similar? Perhaps it might be worth picking at this knot a little, and wondering what this great outdoorsy wanderlust is all about?

British writer Bruce Chatwin spent his lifetime exploring not only the physical world, but also “on what is, for me, the question of all questions: the nature of human restlessness” (The Anatomy of Restlessness). Chatwin described himself as a nomad and vividly evoked his experiences and those of the people he encountered in books like Songlines, In Patognia. Whilst in Nepal, Chatwin wrote: “Man’s real home is not a house, but the road, and life itself is a journey to be walked on foot.” (What Am I Doing Here?).

What if that were literally true? What if human nature is nomadic? What if as Chatwin claimed our modern “life in shuttered rooms” produces a fundamental restlessness and dis-ease. “Brain scientists”, Chatwin wrote, had shown from “encephalographic readings taken from travellers”, that changes of scenery and awareness and participation in the passage of the seasons “stimulated the rhythms of the brain, contributing to a sense of wellbeing and an active purpose in life”. (The Anatomy of Restlessness). I’m not sure we can trust Chatwin on the brain science. He was a well-known fabulist, an inventor of characters and stories presented as factual encounters. I’m not aware, despite some searching, of any study that shows exactly what Chatwin claimed; that EEG brain scans from travellers show the effect of seasons and scenery, their rhythms interacting with brain wave rhythms. Yet culturally it does feel true.

Interestingly, there is recent evidence that human restlessness is related to nomadic life. A team of evolutionary anthropologists at the University of Wisconsin (reported in New Scientist, 10/6/08) studied the effects of a genetic mutation associated with hyperactivity among a nomadic people in Northern Kenya. They found that among the half of this tribal group who had settled there were no positive effects. It manifested as classic ‘hyperactivity’, the scourge of modern childhood (7% of American children are diagnosed with Attention Deficit/Hyperactivity Disorder). But among the still nomadic other half of this people, the same hyperactivity gene was associated with weight gain in males; a positive outcome. The report speculated that “a short attention span and penchant for risk taking could benefit nomads who don't know where the next meal will come from.” The restlessness Chatwin described could be much more than an urge to roam, it could be adapted to a life on the road, always vigilant and alert to possibilities?

There is also a plausible argument from evolutionary psychology that we are, as Chatwin claimed, a nomadic species. For 99% of human history – the entire Paleolithic period – our hunter-gatherer ancestors mostly lived on the move. That’s not to say they were all explorers or drifters. Most moved within a defined territory or route. Some moved with the seasons, or with the herds, or to winter fishing grounds. Some travelled to trade, in flints, hides and other commodities. Very few seem to have simply stayed put. That behaviour emerged only 500 generations (10,000 years ago) with the emergence of the farm, the city and the settler. In evolutionary terms that is an afterthought. It may account for most of our ‘civilisation’. But the universal feelings we have for wide-open landscapes, for the wind in our face… these are much older and are our primary orientation, based upon the lives that our genome expects.

That leaves humanity with a question. What to do with our restlessness?

Tourism accounts for 75% of all international travel and domestic tourism is 5 times bigger still. The whole industry is said to be the largest employer in the world; over 200 million jobs according to the International Labour Organisation. It is hence also a huge factor in the fight to tackle climate change, to conserve oil and precious local resources and ecosystems. Tourism in its current form cannot go on. Yet it is forecast by the World Tourism Organisation to double by 2020. And yet flying isn’t travelling. It’s more like getting in a lift and arriving on another floor. It lacks an embodied sense of ‘migration’. I very much doubt whether two week holidays do much more than irritate the ‘itch’, frustrating us by always falling short of the dream of real travel.

Another modern ‘ill’ - one that became Chatwin’s other obsession - was consumerism; and specifically the compulsion to collect. He had worked as an art expert in Sotheby’s and in his later years became known for extravagant shopping sprees in the auction houses of London (many of which purchases his wife quietly returned). Chatwin’s last book Utz is the fictional account of a collector of fine porcelain. Utz is so obsessed that despite opportunities while visiting the West he feels unable to defect and leave that collection behind. It is a vision of collecting as a kind of prison. The view in this parable of modern consumerism is ironical; a kind of ‘comfort eating’ (unhappy about your body, you eat to feel better and make the problem worse); a cycle of dissatisfaction producing the opposite to the desired effect (which is to be free).

This all places two key targets in developing sustainable lifestyles - reduce flying and curb consumerism – in relation to our innate nomadic restlessness. If only we satisfied our urge to move on with the seasons, to live in several places a year, and we did so by slower means of travel, then we might also live so much lighter. Remember times when for instance you might have been a student living in lodging for part of the year. Your total possessions probably only filled a suitcase or rucksack. Yet you didn’t feel the lack of all the crockery and gadgetry and curtains and cupboards you have bought since, did you? Quite the opposite, didn’t you actually feel alive, with your freedom to rove?

There’s been quite a revival of the nomadic lifestyle in recent decades. New age travelling has become the chosen lifestyle of many of those with the deepest ecological sympathies. It’s almost the norm for educated young middle classes to go backpacking before settling down. There are the music festivals. There is an intrinsic ‘glamour’ to living in a more nomadic way. I used to know a girl who spent dull winters working in London offices as a tea lady (a ‘trolley dolly’ as she put it), then let her summer hair down living in a teepee encampment. Encountering such lifestyles it’s impossible not to feel a kind of admiration, or even envy. What freedom! It’s the archetype of ‘wanting to run away with the circus’. It’s the call of our nomadic true natures.

Looking ahead, when we dream of a sustainable society, we may need to plan a world where (rather than taking a two week vacation, or stocking up with possessions that weigh our lives down) people’s lives once again have an inbuilt migration pattern. We might work for half a year for a big company and then spend half a year in the country, to learn or teach new skills, to help with the harvest or the flood defences, or refugees. We might apply the principles of hot-desking to home ownership? (We could call this hot-housing!) We might develop dual nationalities as the norm, enabling ongoing exchanges of skills and opportunity between the developed and developing world. We know that we need to change our way of life beyond recognition. But perhaps if we follow our nomadic natures, it may after all feel like we are coming home?
Posted by John Grant at 06:19

Very interesting article. As a 22 year old guy, I can relate to many of the wanderlust urges you talk about. It seems that to achieve any kind of new system where nomadic lifestyles could become viable, even to a small degree, would require massive changes in belief systems as well as the very structure of our current society. Not a day goes by when I don't give some thought as to how I can begin to shift the focus of other minds, but it's such a massive overhaul...

Good piece. I believe there is a lot of substance to the 'restlessness' theory, having experienced it myself, and up until I started a family, I was always on the road. I sometimes feel guilty when I think how lucky I was there was no carbon crisis that we knew of, when I embarked on this lifestyle. For youngsters or anyone wanting to take a sabatical, please check out www.lowcarbontravel.com a blog by someone I became great friends with on the 'road' in the Pacific many years ago, Ed Gillespie. Ed has recently returned from a round the world trip with his partner - they didn't fly once. This type of travel makes for an even more creative trip, because you really have to be inventive, and travel by means that you probably wouldn't have experienced if you suffer from a plane addiction.
Britain's coastline is 11820 km long - sod abroad, we've plenty here to keep restlessness at bay. And many of us miss what's right under our noses. I reckon there's enough here or close by to keep our restless souls entertained for many lifetimes.