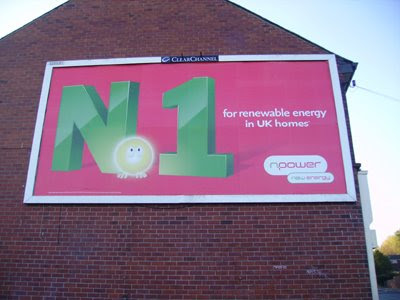 I was at a public meeting with the UK Advertising Standards Authority (ASA) last week. We were there to discuss the vexed issue of greenwashing. A record number of complaints about misleading and false green claims in advertising were received by the ASA last year. The main types of complaint which the ASA had upheld (forcing the advertiser to withdraw its copy) fell into four categories:

1. Lifecycle issues. The product was advertised as having low energy use or emissions or in other ways being ‘green as a product, but consideration had not been made of its total impact across manufacturing, transportation and so on. An example might be Fiji mineral water which is advertised in the USA as ‘environmentally friendly’ without mentioning the impact of transporting it thousands of miles to and across the USA itself.

2. Green energy production. When wind or other renewable energy is bought by customers it is not supplied to them directly (as some adverts misleadingly claimed) but rather it is supplied to the national grid and customers or renewable tariffs buy an equivalent amount.

3. Carbon neutral. Claims in this area need to be very careful not to imply that buying some offsets equates to having ‘zero impact’ or similar wordings.

4. Relative virtue. Some products for instance cars, perform relatively well compared to close competitors, but in absolute terms are still unsustainable. A large Lexus hybrid car was for instance advertised as “Guilt Free”.

There was a lot of debate around these points, around the absence of a clear written code, about the fact that expert judgements and data (for instance about the merits of offsetting) vary between experts and over time. There were some voices which pointed out that consumers are already highly cynical of people making these claims (one quoted a study that said that only 20% believe the green claims made by companies in adverts). But the general consensus was one of wanting to support green advertisers, and businesses in general who were doing the right thing, while being strict on any overclaims so as not to devalue the category and make consumers cynical of any green claims.

I presented another view – DON’T MAKE (COMPETITIVE) GREEN CLAIMS IN YOUR ADVERTISING. Of course that’s simplistic, for instance if you invented a whole new type of product or service you would have to tell people about it, and also I think it’s fine to promote objective green categories for instance organic, fairtrade, low energy and so on. But as a rule don’t use green as the proposition in your communication brief.

For one thing green benefits are benefits for the good of the species rather than the individual buying the product. (Of course you could think of yourself as a virtuous, good person for buying it, increasing your self esteem but that’s a pretty shallow line, even for advertising?) Secondary benefits may derive from doing the green thing, such as health, saving money, better taste and so forth – and generally it is these which successful green brands do promote, rather than their ‘green credentials’. The green claims are much more often made by large corporate companies and brands than little green producers anyway.

The second thing is to consider the true meaning of greenwash which is pointing to something (often perfectly valid, true and not misleading in itself) whilst the overall reality is rather different. The ASA’s life cycle category only partly catches this. For instance I showed a poster by a large power company, claiming quite correctly that they are the number one supplier of renewable energy in the UK. What the ad didn’t say was firstly that the UK is the third least developed country in Europe on its proportion of renewable energy generation, ahead of only Luxemburg and Malta. And secondly the power company in question was rated as the worst performer of all the big 6 power companies on sustainability overall in an independent audit by Innovest and WWF. Not because they don’t sell their fair share (5%) of renewable energy. But because of the other 95% of what they do. They are also facing recent protests over dumping waste in a beautiful lake. All in all hardly a green hero?

Greenwash is a word which was originally coined in the 1980s by a journalist covering the hotel schemes whereby you choose to keep your towel rather than washing it, for the good of the environment. The journalist examined the record of companies who promoted these schemes and concluded that since they did almost nothing else for the environment (for instance none recycled) and since the towel scheme increased their profits by reducing washing costs, you had to be very cynical about their motives.

Other reasons for avoiding competitive green claims in advertising include the fact that it is rejected by many consumers as ‘making capital’ (climate change a heavy negative issue, not to be lightly ‘exploited’), that NGOs and journalists are increasingly looking to attack and expose greenwashers, that making these claims invites such scrutiny, and after all nobody is perfect and there will always be bad things about any product or service or diversified company.

But the best reason for avoiding greenwashing is that you should be spending your money on something better, something which helps people change behaviour, to adopt a greener way of life. One example someone told me about last week, was a power company in America which gave customers their own electricity bill and also their next door neighbour’s bill. It apparently led to a measurable reduction in energy use; presumably by those who found that those next door in a similar house used much less power. It’s a very imaginative, human and involving way to get people talking, thinking and doing.

You still need to make sure that you as a green advertiser do have your house in order first (the hotel towels scheme was similarly imaginative, but fell down on the bigger picture) but in general: spend money on doing green rather than claiming green.
Posted by John Grant at 06:35

This site offers each US City a Green Portal, blog and calendar for sharing local information about being green, becming green and sustaining green behaviours. Being green and getting in touch with what is locally available is at its core...

Look up your zip code and start sharing what your community has to offer now...

Simple answer, when there are no credentials behind the statement.

The sad reality is, I have a whole platform for creating and embedding green credentials within both the processes and products attributes of what I make and I absolutely need to tell my customers what I am doing. Why, because I need to get a return from those products. If I fail to get that sale the whole green venture that I am running will flounder. That will benefit no one.

I resisted for years sprouting off about what I do. Sure, at the start of going green you can save money, but as you get into the process you have to shift the focus from the cost side of the profit equation, to revenue and that means marketing those green credentials.

It is an imperative, there be truth in what ever you assert about your product, service or the processes to create them. One also has to understand a little pragmatism at this time, will in fact assist in the furtherance of green initiatives within business.

If you hit business over the head, and have them running scared, you will loose many a fledgling green effort before it is started. In my opinion every green step needs to be applauded. If the marketing gets ahead of the products credentials then take steps to elevate those credentials and vice versa.

What’s most important is people begin to honestly take the steps toward better outcomes for the environment.

I was there too! It was interesting but not hugely relevant to FMCG yet. I see it becoming so in the next 2-5 years though.

I think it's important for green steps to be truly for the benefit of the environment rather than for the organisation, regardless of cost. Otherwise you lose the meaning of what it is to be green. It's about authenticity I guess.

And another thing I gleaned from that afternoon was that there are so many conflicting standards that it's impossible to quantify what degree of greenness companies should adhere to. Again, hopefully this is something that will evolve in the next few years, and as consumers get more sceptical, we'll start to see universally recognised standards emerging.