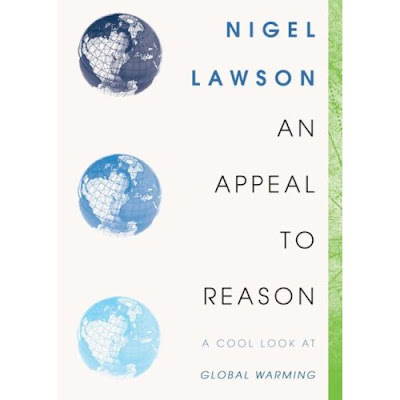 Oh dear. News of a new book from longtime climate change action sceptic Nigel Lawson (last seen in a cameo role on Channel 4's discredited "The Great Climate Change Swindle"). Lawson's panic response to the 1987 equities crash when Thatcher's Chancellor of the Exchequer was credited with fuelling inflation which caused "the UK's worst post-war depression." Now he says that Nicholas Stern got it all wrong, and that the EU should avoid "overreacting" to climate change. On current figures he shouldnt worry too much about that, eg Dieter Helm's estimate of the true UK carbon emissions rising 15% since 1990 (not falling 18% as the government has claimed). If you felt like it he has a piece in the FT today, concluding in a fullsomely pompous tone that "It is time to end this folly". It's arguably a good example of how obsession with 'growth at all costs' can blind you to the suffering and damage this causes (when it was only supposed to be improving standards of living in the first place) - once a moneterist...?
Posted by John Grant at 03:43

I wonder if any of the AGW evangelists ever ask themselves "What if?"

Are their views liberal enough to accept dissent?

(climate change; everyone at last in serious science, in government and business agrees we do need to tackle it with urgency - but "what if" they aren't right?
see also tobacco - what if it's safe?)

I ask myself what is it that Curly has to fear?