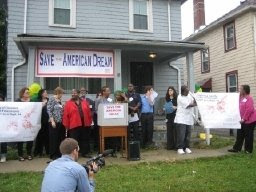 I've just been reading around the sub prime mortgage crisis.

Here's the situation as I understand it:
- 1 in 5 homes in the US have sub prime mortgages
- it's mainly something that's been sold to America's poor communities who find it harder to get credit ratings
- these generally have 2-3 year fixed periods which then 'balloon' into much higher variable rates
- 3 million families will probably lose their home last/this year as a result
- whole towns & cities are being hit hard; streets with boarded up houses, with crime & associated problems
- the reason this has affected banking across the world is that the debt has been sold on in packages, a massive case of 'pass the parcel' resulting for instance in a £$17B write off announced by HSBC today
- the knock on effect being a liquidity crisis, with banks too worried to lend to each other

But actually the main problem as far as I'm concerned - and the story I had been missing from most of the reporting - is that poor people who had a pretty hard lot to start with, are now being thrown out on the street because they cant repay punitive loans. It's not even what we understood by liberal, capitalist democracy - it's more like feudalism.

In 1989 growing economic pressures - and food queues - in the soviet states led to the collapse of the communist system. You've got to wonder whether like the former communists we have been cooking the books - in our case to feed the idea that a never ending 'economic growth' is possible; like some kind of indian rope trick.

For instance:
- subprime lending, a prime example
- current accounts in the UK, all the profits from which a banking insider told me come from overdraft charges
- 'productivity gains' in the service industry, also known as people working longer and longer and longer hours
- the insanity of free market pricing where a flight can cost £10 (or a t shirt £1) yet millions of people in fuel poverty cant afford to heat their houses in winter
- the action of fashion cycles and artificial redundancy (or both in the case of computers, phones etc.) making for profits based upon wasting resources
- also I was told some years ago (by a major figure in the UK IT scene) that it is doubtful that the productivity gains from IT have ever/would ever outweigh the costs of all the upgrades, and teething problems and integration and so on

Up until the mid 1980s the market and book value of companies were approximately equal. After that we took a trip into an unknown territory which may strike historians as being something a ponzi scheme. A Ponzi scheme is roughly one where current participants in a racket steal from future participants. Is a housing market boom which has made housing literally unaffordable to present and future generations anything other than this. According to the British Banking Association, the average monthly new UK mortgage repayment (based on a £159k loan) is more than 100% of the average take home salary. And back at the sub prime crisis, history suggests that those with the least will lose the most, yet again. Dont even get me started on record profits in the oil industry!

This will all have huge implications for any response to the growing environmental crises. Looked at another way, maybe we needed a crisis of some sort to wake us up from a system built on broken promises (and broken lives, communities, families)?

As the banner in the (foreclosure protest) picture above puts it: (can they) save the American dream?

And is the ideal of economic growth at all costs born out by the ugly realities?
Posted by John Grant at 13:15

I love this interpretation. Am forwarding to my friend Zoe at the CDP who will be right with you. Hope all's well, F.

Hi Freya, lovely to hear from you - all's well thanks. I saw Tamara a couple of weeks ago when she was in London (and from what I gathered your one woman sustainability revolution in the agency business continues to go from strength to strength?) :J