(Article for next month's Medicat, the Turkish marketing magazine) 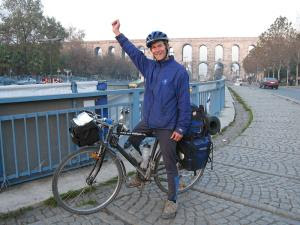 I want to write about green issues and Turkey. I do so at some distance and with limited information, which is risky. But I think it’s important to look at this issue in its local context. And I am absolutely thrilled to be coming to Istanbul later this year to talk about green marketing. Not least because by getting behind green marketing and helping people change their lifestyles you can have a bigger impact than in most countries, as we’ll see!

Everyone in the world should be worried about climate change. With every year the news gets worse and existing projections prove too optimistic. For instance it has recently been found that the arctic ice is melting 3 times faster than had been thought (by the IPCC); all the summer ice may be gone within a decade (rather than by 2050 as previously thought). Anyone who lives near sea level may want to think seriously about what this means!

Apart from global changes, a NASA report on climate change in the Middle East pointed to the desertification of Turkey by 2040. Just think what that means. Turkey right now leads the world in agriculture, being among the top 5 producers of vegetables, tea and raw wool. Just imagine those beautiful fertile agricultural plains reduced to a dust bowl, within our lifetimes. It hardly bears thinking about. Yet the evidence is there that it is happening. Climate change poses extreme, immediate threats to the fabric of human life.
It may be too late to undo all of the damage. But surely we cant stand by, knowing this, and do nothing? What the scientists are saying now is we need to go much further than Kyoto, to reduce emissions by 80-100% by 2050. In the long term that means deploying a range of alternative energy generation and efficiency technologies on a massive scale. In the short term it means reducing our impact with current technologies to the greatest extent possible.

So how is Turkey doing on climate change so far? Let’s look at the figures. The Kyoto treaty took 1990 as the baseline date against which improvements should be measured. The aim which 175 countries have by now signed up to is to reduce GHG emissions by 5.2% by 2010 (in Europe the target is an 8% reduction). Turkey is not one of those Kyoto countries. Turkey’s performance since 1990 according to UN data has been to increase GHG emissions by 84% by 2005, and figures suggest a 100% increase overall by 2010.

Why so high? Are you like China, just experiencing the effects of a rapidly growing industrial economy? Actually, not really – for one thing you’ve done really well to manage it differently than China. According to published figures Turkey has been very good at making its electricity generation have less impact (for instance using more natural gas). The result being that industry and energy taken together account for less than 10% of the overall growth.

One key area identified by the UN’s report as the culprit for Turkey’s spiraling out of control on emissions is… transport. You drive too much. (As is obvious from the traffic in Istanbul which rivals any city in the world for congestion and pollution).

It will take your government many years to even start to tackle this. You are not China after all (where the Beijing government ruled that those with odd number plates can only drive on odd numbered days and those with even numbered plates on even days). The change has to come fast and it will only come – if at all – from persuasion, which means green marketing.

To illustrate… One trend which has worked quite well to reduce car dependence in many other parts of the world is a move to city cycling. Cycling is not just functional, it has become cool in cities from San Francisco to Berlin; first it was mountain bikes, and today it is fixed gear bikes which are all the rage.

If you make or sell sports clothing equipment (or indeed are just a big company like a bank or newspaper who wants to get behind something that makes a real difference) then I have a simple message for you. Get Istanbul to cycle! It will be good for the city, for the air, for health. Get politicians to cycle, get school kids to cycle, and above all get the millions of students, commuters, service workers to cycle.

One thing to study might be the jogging craze in the USA in the late 1960s. Here were some of the ingredients:
- a bestselling book (by sports coach, Bill Bowerman) called “Jogging”
- a hot new brand (founded by Bowerman and others) called Nike
- celebrity endorsement (Jane Fonda for one)
- national television coverage
- highly visible on street presence
- fashion; the jogging outfit
- clubs, events (fun runs) and local activities
- city government support, eg jogging routes and lanes

Above all this was a clever piece of branding; a new word and concept – jogging; it wasn’t walking and it wasn’t running, it was something new and cool.

Jogging did Nike very little harm either (it took it from a $1m specialist running shoe company, to a $1B runaway success). A bold brand – or consortium of brands - that got Istanbul to cycle could also do well by doing good. Maybe it should actually be Nike? But how much better if it were a local hero that stepped forward?
Posted by John Grant at 09:20