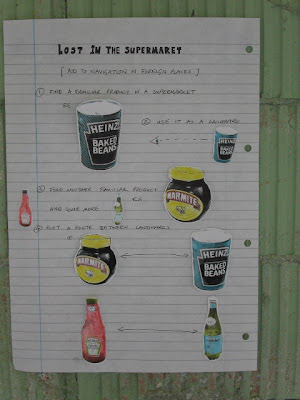 Really interesting post at groovygreen about the Green Festival in San Francisco. Quote: "The Exhibition Hall was packed with booths, hundreds of them, all trying to sell us something. Soap, teas, books, T-shirts, fair trade scarves, renewable energies, TV shows, food, chocolate, lunch boxes, jewelry, cars, bikes, social networks, magazines, alpaga coats, pet food, seeds, toys, travels, cell phones, salad bowls, . . . and a lot more I can’t remember." The blog went on to note the kind of consumerist frenzy that sets in: "my hands full of flyers, and magazines of all sorts. What to do with all the stuff? I could only hold so much. I started thinking, I should have brought a bag. But then, I had not come here expecting to collect so much. That’s when I noticed the crowd around the PG&E lady. I quickly grabbed one of the free canvas bags she was handing out. Now I was free to resume my chase for more goodies."

There's a question I keep ducking in public forums which is as old as the green movement; dont green concerns demand that we consume less? My answers have tended to be yes but...
- yes but you can still meet people's needs with service like sharing, renting, long lasting quality and so on
- yes but there are consumerist lusts pulling in the right direction; ebay, minimalism, junk chic
- yes but cutting is only one way to do it, there's also switching to better alternatives
- yes but there's loads of new stuff we really should buy; better loft insulation for example
- yes but like in the dotcom boom there are huge gains in efficiency (saving planet, saving money/time/waste)

An example of the latter - efficiency paradigm shifts - is George Monbiot's suggestion to ban out of town retailing: "Legislate for the closure of all out-of-town superstores, and their replacement with a warehouse and delivery system. Shops use a staggering amount of energy (six times as much electricity per square metre as factories, for example), and major reductions are hard to achieve: Tesco’s “state of the art” energy-saving store at Diss has managed to cut its energy use by only 20%(6). Warehouses containing the same quantity of goods use roughly 5% of the energy(7). Out-of-town shops are also hard-wired to the car - delivery vehicles use 70% less fuel(8)" link

Taking a gentler line than banning, look at how much more convenient, affordable and wide ranging Amazon is. More than $200B will have been spent in online retail in the USA in 2007 according to Comscore. All we need now is an efficient local delivery network, possible a universal one (bring back the milkman, or webvan).

There are lots of such opportunities with economic/ecological logic intertwining.

But then again $200B? as just the online part of consumer spending?

The sector really in question is green consumer luxuries. Is lots of lovely stuff in any form (organic, fairtrade, bamboo, gm free...) good for us, let alone the planet? Doesnt it even get in the way of real quality of life, simple pleasures, relationships with other people? Do we ever truly get the space to be or become ourselves?

But then we get to the edge of a precipice of doubt. If not modern America-led consumer capitalism with its twin cultural imperatives (according to Umberto Eco) of MORE and THE REAL THING... then what? What would be it like to just fall for a bit (see thread on the potential recession) and see if life catches us? It's really challenging stuff and I dont want to get into romanticised downshifting (a dropout retreat, for some - yet still reliant on welfare state, electricity, and all sorts).

It's a conflict. One breakthrough idea in response has been sustainability which is the doctrine that if we tread carefully we can still have both. I'm suspecting there may be other such ideas still to come. Initially counterintuitive but liveable (in the sense that Ghandhi's nonviolent resistance was both). It's obviously not much to do with marketing, even green marketing. It's more about moral and political ideas. Anyway I've no answers, I just thought I'd acknowledge the question.
Posted by John Grant at 14:24