In an (not so) Absolut World 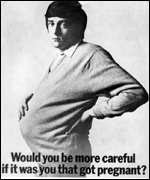 Remember those great Saatchi ads with the pregnant man?Clearly TBWA do... 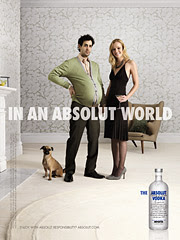 Unoriginality aside, this is such a naff campaign. Check the pillow fight commercial which is like a Carling spot (we dont make riot police, but if we did they would probably be the best riot police in the world because they'd use pillows not batons) dragged down to the level of deoderant advertising. I cant be bothered to link, you'll find it on... (stifles yawn) some video sites.

A passing comment from an ex planner. Why advertise a premium product steeped in reverence by switching to jokey blokey humour? You dont need to be a semiotician to know that its old campaign was like Chanel and its new campaign is like Lynx/Axe; with product/positioning connotations accordingly. Actually forget the planning. it's just naff and faintly embarassing as advertising. $45m well spent... not!

So why is on my blog? My green blog at that. Well they did one brilliant thing.... 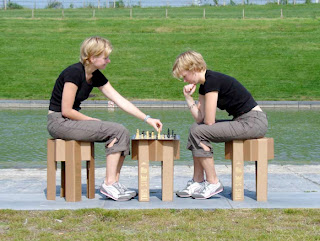 I like the treehugger brand so much that I can forgive their new found friend Absolut for its crap advertising in other channels which of course i will never have to endure and even if I did isnt that different from most other ads, it's almost nice that they've made bad ones so as not to encourage people to drink more than they should. I remember now that this is a brand which despite its current ad campaigns has a penchant for design, comes from the sustainability heartland of Sweden and so on.

It's not an Absolut world. People are thankfully still fickle and contradictory. Absolut I hate your ads, but that's your agency's fault, somehow I still do like your brand.
Posted by John Grant at 15:25

While we're on vodka what does everyone think of that Smirnoff ad where the sea rejects all the rubbish we have dumped over the millenia (as a metaphor for their purification process)
http://www.youtube.com/watch?v=IuXk-W5mkj0

Is it an example of clever zeitgeist surfing? Or exploiting a genuine public feeling to sell people booze? Does it matter so long as they clearly arent really trying to say how green they are? Is it even thought provoking (like Diesel) you might argue, which is a thought contribution. There have already been a few bloggers off the fence on this one eg the honorable charles frith
http://charlesfrith.blogspot.com/2007/08/is-smirnoff-full-of-shit.html

This made me laugh. O&M did this for Ford years ago. 'We don't make football boots but if we did they'd be really cool football boots that would help you score lots of goals' kind of thought. Then the Carlsberg campaign, as you mention is almost exactly the same. Now Absolout!

I haven't seen any other ads in this series but I bet there's one that involves a parking attendant.

I like that ad where the sea rejects all the rubbish. It ties in to a lovely piece of insight from nick the explorer at the c4 event yesterday, where he said that 'nature will bite back'.

i'm thinking viral. i'm thinking...angry mother nature? i'm thinking...everyday moments when you think the world is against you and you wonder 'why', where we then pan back to a moment of 'un-green' behaviour from a consumer. a travis 'why does it always rain on me?' moment ;-)